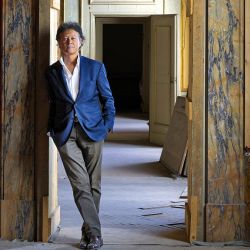 Massimo Listri is an Italian photographer best known for his large-scale images of majestic, empty interior spaces. In his photographs of castles, abandoned houses, libraries, cathedrals, and theaters, Listri often symmetrically composes the space in order to lead the eye into the framed pictorial space. In his balanced compositions, the artist captures a sense of awe while celebrating the intricacy of grand architecture. Born in 1953 in Florence, Italy, Listri began taking photographs at a young age. In 1981, he helped found FMRmagazine and went on to publish his own work in numerous architectural books. The artist’s works have been exhibited in the Morgan Library and Museum in New York, the Museum of Modern Art in Bogota, the Vatican Museum in Rome, and the Buenos Aires Museum of Modern Art, among others. Listri lives and works in Florence, Italy.