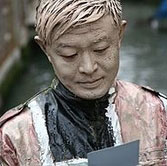 Liu Bolin was born in 1973 in the Chinese province of Shandong. He finished his studies at the Central Academy of Fine Arts in Beijing with a Master of Fine Arts in 2001. His works have been shown in museums across the world ever since, and he rapidly made a name for himself as “The Invisible Man”. His best-known photographs are from the Hiding in the City series, which began as action art in 2005.