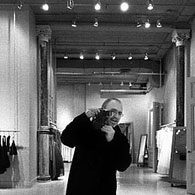 The photographs of Howard Schatz are exhibited in museums and photography galleries internationally and are included in innumerable private collections. He has received international acclaim for his work.

In Character: Actors Acting Schatz’s sixteenth book of photographs, has recently been published by Bulfinch. Schatz photographed 100 actors of stage, screen and television, directing them in one-on-one improvisation. Botanica (Bulfinch 2005) and Athlete, (HarperCollins, 2002) were Schatz’s two other most recently published books of photographs.